In episode #5 of Brainstorm Bites we discuss impacts of a dis-organised brain. The inability to efficiently access information from various levels is a significant developmental concern. For example How can a child learn math or language - both clear examples of high brain - level three functions; when the child is performing primarily at level 1. The child's brain has a limitation for learning. The brain is unable to access other levels of development. This is a dis-organised brain.

Hi, I am Darren Gray, Chiropractor and neurological rehabilitation therapist from Brainstorm Rehab. I switch brains on.

The brain is quite a complex organ. It is so complicated we are still reaching into new frontiers with brain science. The developing brain obeys a principle of hierarchical development. This technical term we will chat more detail later. However, consider Hierarchical Development as stages like stops along a train journey. As such for appropriate learning, sequential stages are required for brain maturation. Hence it would be unrealistic for a child perform activities such as to drive a car or play a concert piano. Rather for a child of similar age to catch a ball and or skip a rope.

To explain this process let's imagine the brain is a multi-storey building, with three levels. Each level performs unique functions and roles. For example, level one -the Brainstem - is essential for early postural control, vestibular and balance function and developing reflex integration. Contrast, the third level - the high brain - is the cognitive processing, executive learning, and functioning part of the brain. Linking each level is an elevator. This elevator can freely traverse to all and any level as required.

However, a dis-organised brain according to the Hierarchal development, the lift is stuck. That means the child will have difficulty accessing various levels of brain function. The inability to efficiently access information from various levels is a significant developmental concern. How can a child learn maths or language - both clear examples of high brain - level three functions; when the child is performing primarily at level 1 or Brainstem. The lift is stuck at level 1. The child's brain has limitation for learning. The brain is unable to access other levels of development. This is a dis-organised brain.

An approach to restore is to establish patterns within the brain. Specific re-training and therapy have been shown very useful for the treatment of a dis-organised brain.

At Brainstorm, we are dedicated to switching on brains. For references and information, jump to brainstormrehab.com.au or join the conversation on Facebook. Thanks for joining us today on Brainstorm Bites podcast.

Greenspan, S. I., & Wieder, S. (1999). A Functional Developmental Approach to Autism Spectrum Disorders. Journal of the Association for Persons with Severe Handicaps. 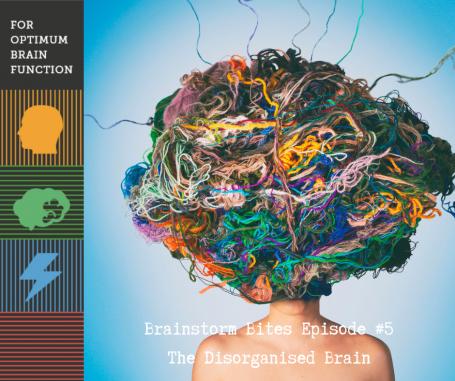